Hello w0rld. In this post I will show how it is possible to (mis)use ICMP protocol for file transfers with scapy.

I have to give credit to the GhostInTheShellcode 2015 for “borrowing” the idea from the forensics challenge (see my previous post!). It is quite tricky to achieve, but the effort is worth it for the result. Network filtering restricts the traversal of specific packets or all the traffic of a kind. A firewall (pseudo)entry might be similar to “allow src dst http” “allow src dst icmp” and the (invisible usually) implicit deny restrict all other traffic. In cases like this there are 2 solutions; either use the existing “allow” for transferring data or switch to a different protocol which is allowed. ICMP is usually allowed because it was created for network troubleshooting mainly. More over messages like ICMP timestamps are blocked but echo requests/responses are not. A network admin that denies ICMP traffic will have troubleshooting difficulties when problems arise. The idea is not new, and according to the wish list of metasploit we should expect to see ICMP/UDP file transfers add-ons/functionalities to be introduced soon.

My idea can be summarized as the following:

For dealing with my ideas, I created 2 python scripts, a sender and a sniffer for grabbing the file. The sender is straightforward. The only thing that I had to add is the way of tearing down a file to multiple chunks and then parse these chunks for sending them. I used an “offset” so that in the future I can change the offset and have my chunks in different sizes. For the screenshot below you need to know that x=1 and y=2. So the seek() will be executed just once for moving the file descriptor “offset” bytes ahead.

Setting the offset for subsequent read

Another issue that I had to solve was that I wanted specifically to grab the Type 8 “echo request” messages. However when I was setting a filter=icmp and then in my callback function an if statement as the following I was getting back duplicate packets.

Because of that I had to use a statement as if raw in downloadlist so that I removed the double entries from my list.

Another funny problem would arise in the case that another machine pings the receiver. In that case the payload of the echo request would be appended on the file. For this I just created an if statement and grab the packets coming from a specific source address.

Then we launched the client and the sender and… 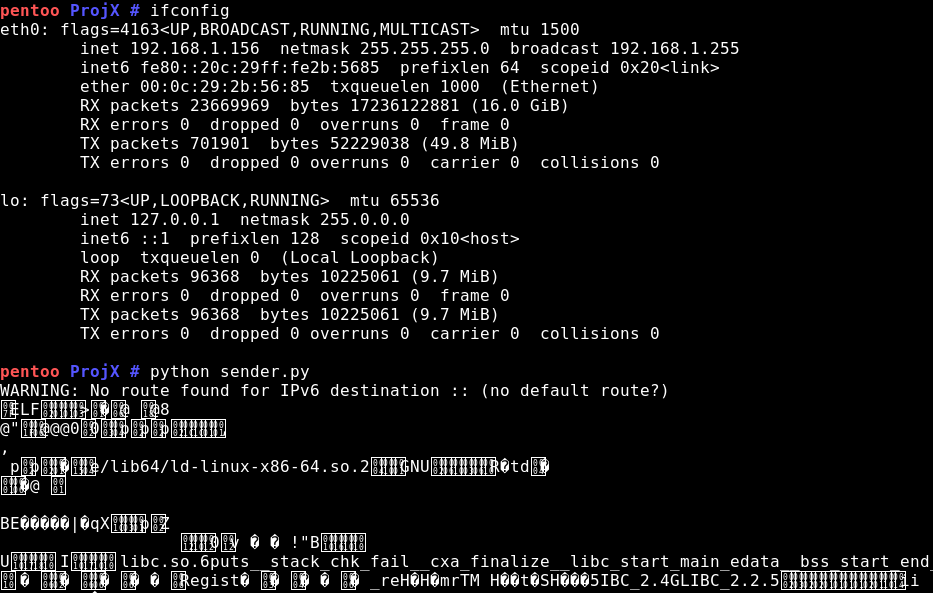 Sender. Sorry for the painful output of the non-printable chars 🙁 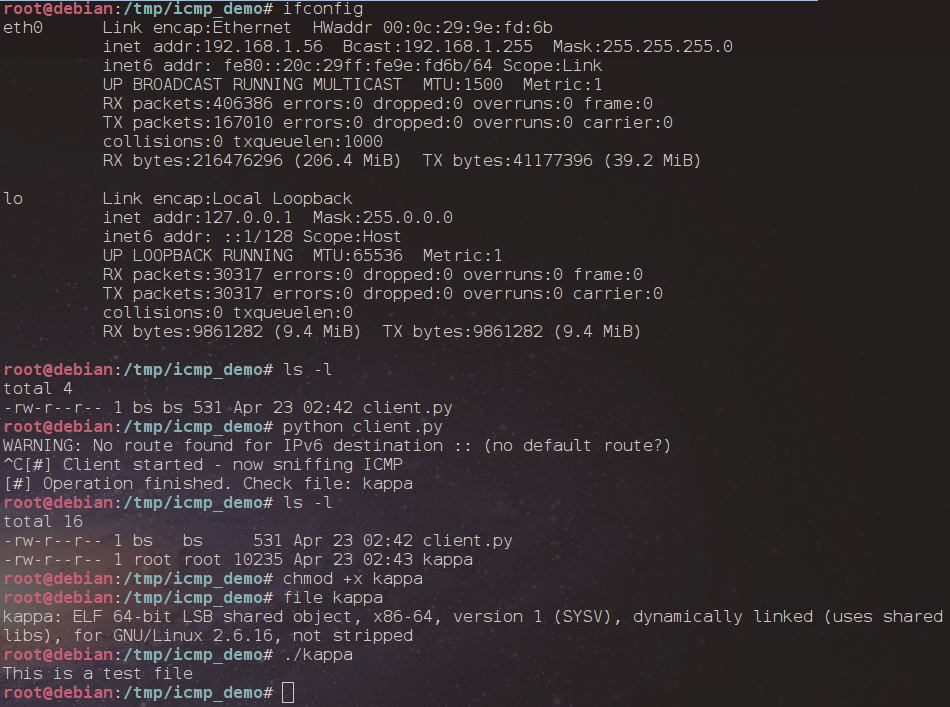 Client receiving the file and.. boom!

As you can imagine this PoC does not employ a way of obscuring what was sent. We can see that from what tcpdump spits…

tcpdump clearly shows that some sort of an executable file that uses libc was transfered!

There are multiple limitations and challenges here.

1st  The receiver/compromised host will reply back the payload that will be received; a behavior that is not good

2nd ICMP does not have a “window-size” as TCP; there isn’t any “sliding window” that will allow us to send multiple chunks of a file in a single window. We need to take care of that somehow.

3rd The ordering of data chunks is also a challenge. If the 2nd chunk arrives before the 1st one because of network-related issues (maybe a different route was chosen…) then the receiver/compromised host will reconstruct the file incorrectly

4th Since scapy will be used (for now) we have all the limitations related to its capabilities (root access, installation dependencies, etc).

In order to make it happen we need a small script to behave as a client and another one for the sender. The sender should also take care of the breaking up of the file to chunks of a specific size (must be less than the max_payload_size).

Assuming that the ICMP type 8 messages are permitted then detection of a file transfer happening like that comes down to whether an IDS look for “abnormal” traffic. The type 8/0 messages depending on the OS (*nix/Windows/etc) have a similar payload every time that are getting sent (however it depends on the OS, Windows do not have the same payload with Linux). For finding the actual file though, a reconstruction of the file is necessary. Dealing with avoidance we have the following paths that we can use:

Hiding the message though, doesn’t prove the fact that something sneaky happened. If an IPS monitors the ping requests and realizes that the payload is not the one that it should be then it can just discard the packets. There also firewalls that perform stateful inspection of ICMP.

Covert channels are becoming more and more used. We have seen already steganography been used in videos, music but also in networking protocols. A malware author might use ICMP and/or UDP for dropping his downloader and the necessary protection mechanisms must be therefore deployed for mitigating that risk.

You can find the sender/client scripts in our github here

If you are still here, thanks for your time 😉

This happened while testing the sender with an offset=3!

Blooper: When computers decide not to speak human-languages…

Recently we posted a bunch of advisories relating to Ivanti Unified Endpoint Manager, a couple of which are for vulnerabilities which can be used to achieve local privilege escalation. We will give a brief explanation of the vulnerabilities and an example of Sysmon configuration rules to log exploitation attempts, along with the rationale behind them so you can adapt them to your existing configuration if needed.

A number of web components in Endpoint Manager do not properly sanitize user input when executing SQL queries, leaving the application vulnerable to injection attacks towards the underlying database. On a standard installation with default options, the account used to query the database is database administrator.